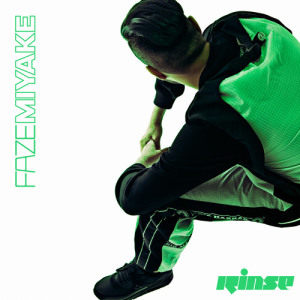 Faze Miyake steps into the spotlight on his self-titled debut album, bringing everything we love about his weekly Rinse FM shows and previous productions into one beautifully crafted body of work. Its woozy bass driven style of beats, twisting and turning from dubstep to grime, make for a chilling and sharp listen. Winter is coming and Faze Miyake will be your soundtrack.

Little Simz is one of the few rappers in the UK who currently could handle the beat on opener ‘The Nest’, its switch up in styles and wonky beat patterns displays Faze Miyake at his very best. Little Simz moves and adapts to the beat, as she impeccably varies her boisterous flow, boasting and flaunting her highly impressive rapping abilities. When second track ‘Burciaga’ kicks in with an equal amount of swirling body shuddering bass lines it’s clear a journey will commence. ‘Ice Cold’ and ‘Below Me’ show the versatility that Miyake offers; on the one hand you’ve got the frosty vocals of Inga Copeland layered over a truly chilling instrumental on ‘Ice Cold’, and then you’ve got the frenetic trap inspired ‘Below Me’, with Chicago rapper Sasha Go Hard featuring on the track. Instrumental song ‘Ocean Drive’ is placed in between the two contrasting styles and provides the perfect transition between the two.

As the dust begins to settle down after the furious opening to the album, it delves more into Miyake’s style, fluctuating from heavy dubstep, big room trap and grime instrumentals. ‘None Of That Stuff’, featuring his crew Family Tree, ‘Snow Leopard’, the Katy B like ‘What U Say’, featuring Izzy Brooks, and towards the latter end the sizzling instrumental ‘Blk Horse’ are the main highlights as the album plays through.

This is Rinse FM’s first full release since last years Katy B project, and although it does not have the commercial viability that had, it will sure send shockwaves through the underground. Miyake has announced himself with a bang, and is rightly taking his place as one of the top producers in dubstep and grime – now with an album that is more than worthy of that title.