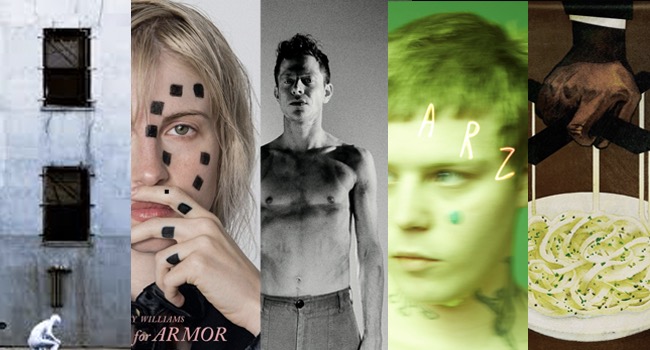 By the time May came around, each month had started to blur into one, and a feeling of doom and gloom lay rife in the air, as everything that we had looked forward to slowly withered away and was being cancelled, or rescheduled for what would be either the first or second time of many more. Completing a Netflix series had become the norm and no longer an accomplishment, and having walked the 5 mile radius surrounding my London flat a good ten times over, it all started to feel like a Deja Vu. New lockdown hobbies and interests started to fade, and the constant battle to stay motivated was a fortnightly crisis. Even new music wasn’t quite hitting the mark, and some of the albums in this post were listened to retrospectively.

World news was obviously dominated with COVID-19 updates, but there was a few other noteworthy stories; live sport returned with UFC 249 and the German Bundesliga, albeit behind closed doors, and Elon Musk‘s company SpaceX successfully launched their shuttle Crew Dragon into space. May was also the month which saw the shocking murder of George Floyd, an unarmed black man who was killed whilst being detained in Minnesota. The incident sparked outrage across the United States, and the World, subsequently leading to many Black Lives Matter protests. I wrote a piece about it at the time, which you can check out here.

Amidst all of this, new music once again proved to be a valuable respite, whether listened to at the time, or since. This month saw new albums from Boston Manor, Perfume Genius, and Yung Lean, a debut solo project from Hayley Williams, and a brilliant collaboration between Freddie Gibbs and The Alchemist. Check out my reviews for all of them below;

Starting off proceedings with Boston Manor’s exceptional third full-length studio album ‘GLUE’. This was my most anticipated album of the month, and it really didn’t disappoint. Whilst the songs were written long before the coronavirus outbreak, the themes of adversity, human nature and the exploration of modern life, seizing opportunities however they may come, strike in a pertinent way. We’ve become accustomed to the Blackpool natives ability to derive happiness and cathartic anthems from a lyrically deep and dark place, and this album delves even deeper into the sombre and vulnerable nature of humanity. Frontman Henry Cox examining his own mental health with it, as he sits on the side looking on. ‘On A High Ledge’, ‘You, Me & The Class War’ and ‘Terrible Love’ offer such insights into the mind of Henry, whilst tackling some of the aforementioned subjects. Whereas ‘Everything is Ordinary’ and ‘Plasticine Dreams’ are shimmering anthems that explode into life, the later a Britpop inspired tune, and the former an industrial synth-driven opener that sounds highly charged. ‘GLUE’ excellently channels these differing styles into a sleek and eloquent record, one that evokes the inner frustrations and angst of the bands members into an album that resonates, and pours out with emotion.

Being the frontwoman of Paramore, Hayley Williams has never been shy about putting her feelings out there. She twisted deep and personal experiences into pop-punk anthems, and was hugely influential as the band garnered a massive following. 16 years on from the bands formation, Williams has now released her first solo album, a three-part project entitled ‘Petals for Armor’. The album is an intricate and neatly woven series of emotional shifts and sonics, perhaps the most honest, open and vulnerable we have ever seen Williams. It’s a beautiful, but harrowing journey through the records 15 songs, as she lifts the lid on repressed emotions, processing grief, rage, desire, femininity and more. She addresses her well-documented life and her late marriage on ‘Dead Horse’, a quite frank appraisal “Held my breath for a decade / Dyed my hair blue to match my lips / Cool of me to try / Pretty cool I’m still alive”. But as in any life, there is hope, and the vulnerability and facing up to emotions has made her stronger, as shown on tracks ‘Over Yet’ and ‘Sugar on the Rim’. This was not only a bold move musically by Williams, but lyrically too – one that has undoubtedly paid off.

Mike Hadreas’ fifth album as Perfume Genius is an intimate and beautifully eloquent tale of connections, love and mortality, his most accessible and ambitious album to date. Since releasing music in the early 2010’s through Perfume Genius, Hadreas has kept on pushing boundaries, each album since 2012’s cult classic ‘Put Ur Back N 2 It’ becoming more grandiose, swerving between genres, such as goth, glam, synth-pop, soul and indie-rock. ‘Set My Heart on Fire Immediately’ explores all of these sounds, channeling a variety of different moods, subjects and personal anecdotes. At times, the album plays out like an Alfred Hitchcock thriller, other occasions a brooding romantic, the album really does have a cinematic feel to it. Guided once more by the meticulous work of producer Blake Mills, and an excellent troupe of musicians, Hadreas glides between wistful ballads, and guttural tales of woe. A truly remarkable record, and one that will leave a lasting impression.

Yung Lean’s style of nihilistic, drug-fuelled emo rap, that burst onto the scene back in 2013, lit the torch for many up-and-coming artists to breakthrough and make the music into a mainstream genre, years later. He led the way from turning his success on music streaming platform SoundCloud, into being a global superstar. Artists such as Post Malone, Lil Uzi Vert and Lil Peep, came up through the slipstream that Yung Lean had started. However, despite his fame, the Swedish rapper never quite hit the kind of musical success that those aforemtioned artists managed to achieve. In truth, Lean’s character became bigger than the music, a Swedish kid rapping about Arizona ice tea whilst wearing a bucket hat, his zeitgeist videos and memes, the actions caught the wave and imagination of an Internet age, but could have also been what stunted him. We were never quite sure whether it was just brilliant satire, or genuine, but what was an in-Tumblr secret that only a select few knew about, an inside joke that millions were in on, had become an artist collaborating with some of the most popular musicians in hip-hop, and selling out shows across the world.

Now on his fourth studio album, ‘Starz’ represents another step in a direction away from his early Soundcloud days. A mature artist is developing, one that appreciates the well-defined sound that got him to where he is, but isn’t afraid to move on from the one-liners, and the psuedonym he created. He is taking his quirky idiosyncrasies in a different direction, but it’s hard to move away from an image that became so synomonous with his music. Each album that Lean has released since ‘Unknown Death’ in 2013, seems to have edged a little bit further away, an attempt to achieve the respect that he deserves as a pioneering musician. Whilst the album never quite reached the heights to elevate him beyond his current status, there’s enough captivating moments to keep him in the picture, and on the right track, remembering that he’s still only 24!

Freddie Gibbs and The Alchemist – Alfredo

If there was ever a rapper and a producer who seemed perfectly made for each other, then it would be Freddie Gibbs and The Alchemist. ‘Alfredo’ captures a master beatmaker at work, totally in tune with the artist he is working with, and a rapper entirely at ease with his craft, gliding through each track with effortless seduction. They reignite a partnership that dates back to 2018’s album ‘Freddie’, an album alongside last years Madlib collaboration, that really put Gibbs on the map. The Indiana rapper is aided by a decent selection of features too, the likes of Rick Ross, Tyler The Creator and Benny the Butcher, all adding their flavours to an already rich tapestry of styles. Seamless in nature, witty and referential in substance, ‘Alfredo’ is a record that encapsulates two pillars of hip-hop thriving in each other’s company.

One thought on “Album Reviews: My Top 5 Albums Released in May”