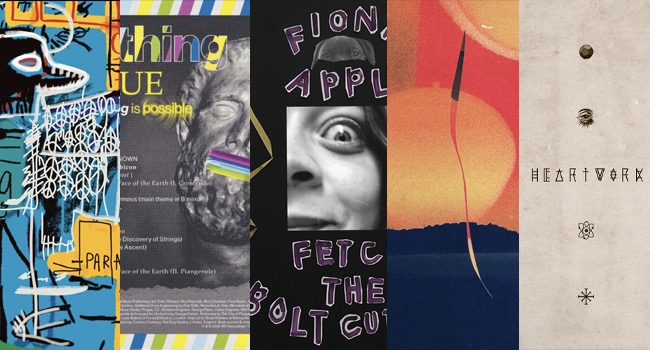 Here we go again! As I continue to look back through my albums of the year, month by month. This time I’ll take a look at April, which saw the return of The Strokes after seven years, the wonderful collaboration between Tom Misch & Yussef Dayes, amongst fantastic new albums from Enter Shikari, Fiona Apple and The Used. April once again saw an abundance of new music, and as always it was hard to pin down what my top five albums were. This list could have easily included Thundercats ‘It Is What It is’, and new releases from R.A The Rugged Man and Dance Gavin Dance, but alas I can only pick five, and these are the beautiful albums that I have chosen.

But first, what was the state of the world back in April you ask? Well, North Korean dictator Kim Jong-Un was reported to have died, which proved to be false, The Pentagon released videos of possible UFOs, 78 year-old Bernie Sanders stepped aside for 77 year-old Joe Biden to be the nominee for the Democratic Party, and we had all gone a bit lockdown crazy, as toilet paper and pasta finally started to return to shelves, on a restricted basis.

Amidst all of this chaos, these albums offered a brief respite, and some poignancy, for the times that we were living in. So, without further ado, let’s take a look at my top five albums released in April;

The Strokes – The New Abnormal

As mentioned, it had been seven years since The Strokes last album was released, and a lot has changed since then. The world was a different place back in 2013, but if we can cling onto one constant, then that will be the abilty of the New Yorkers to create that woozy late-night grandeur they’ve always been so skilled at evoking. Tracks such as ‘Bad Decisions’ take us back to the neo-New Wave of the bands classic era, whereas ‘Brooklyn Bridge to Chorus’ and ‘Eternal Summer’ usher in a new exploration of sounds, the former a homage to Human League, and the latter a sparkling hit with leanings towards neo-R&B. With legendary producer Rick Rubin at the helm, we shouldn’t be surprised the band feel in an experimental mood, striking the right balance between progression, whilst maintaining the well-defined sounds that we have become accustomed to. On ‘The New Abnormal’ the band feel rejuvinated, fresh from beleaguered recording processes and intra-band arguing, which had marred previous releases. The album does drop off a bit towards the end, but this was a welcome return to The Strokes at their 00’s best.

Enter Shikari – Nothing Is True & Everything Is Possible

This was perhaps one of my most anticipated albums of the month, having been a huge Shikari fan since the early albums ‘Take to the Skies’ and ‘Common Dreads’. The band acted as a gateway into heavier music for me, the heavy guitar riffs and Rou Reynolds soaring vocals, matched by massive electronic breakdowns, was something completely unique, and meshed together different music styles that I was listening to at the time. I also liked their political voice, and whilst they’ve experiemnted with different sounds and evolved as a band, this has remained. On ‘Nothing Is True & Everything Is Possible’, now their sixth studio album, the band have come full circle, offering an ambitious and inspiring piece of work, that perfectly encapsulates their legendary career. The album is a celebration of everything Shikari is good at, skillfully interwining experimental electronic sounds, with the usual wonderful guitars and drums, Rou’s witty and inteligent lyricism, poignantly taking a look at the state of society and politics, all pieced together with beautiful and subtle interludes. Whilst some bands decided to delay their album release due to COVID-19, Enter Shikari went ahead, and for some reason the album feels perfectly timed, and just what was needed.

Whilst looking into what albums were released in April, and seeing if there was any that I may have missed, it was hard to ignore Fiona Apple’s fifth studio album ‘Fetch the Bolt Cutters’. Using the site albumoftheyear.org it was one of the top-rated albums, and it is Metacritic’s highest-rated album of all time, so I thought I’d give it a listen. Coming in with that weight of expectation, it would’ve been easy to be left dissapointed, but the album is so strange, weird and wonderful that it really took me aback. Largely recorded between 2015-2020 at her home in Venice Beach, it has an accessible feel to it, like we are privvy to something heart wrenchingly beautiful happening right in front of us. Close your eyes and you could be there, watching as Apple experiments with different makeshift percussions in the form of handclaps and chants, a variety of sounds such as echoes and whispers, breaths and screams, bouncing off the walls, and jokes, and dogs barking, are all audible noises in the background. In a time where music is quite heavily focused on making things sounds perfect, Apple thrives on making it sound imperfect. She allows the listener in, all of these various aforementioned noises and so-called mistakes, enabling the core of her music, her voice, songwriting, and the piano, to shine. At the time of the release, we were in the middle of a pandemic with no live performances, we had gotten used to watching musicians at home, and this album feels unintentionaly apt to come at a time like this. As we were all being ordered to stay at home, often separated from loved ones, Apple provides a connection with the everyday life that resonates so poignantly.

Tom Misch first came onto my radar with his debut album ‘Geography’, which turned out to be one of my favourite records of summer 2018, back when I was working and attending festivals *sigh*. The infectous laid-back grooves, combining lo-fi hip-hop beats with acid jazz, his voice and songwriting, and perfectly timed features, made it an album that I couldn’t get enough of. Since then, Misch has sold out Brixton Academy and performed excellently on NPR’s Tiny Desk, continuing to show what a talented mult-instrumentalist he is. He has a knack of picking out great musicians to collaborate with too, and with Yussef Dayes he turns to one of the UK’s most innovative drummers and producers. The result is an album that is a perfect synergy between the two, creating a record full of innovation and atmosphere, that pushes both musicians to their outer limits. It’s a mix of different styles, with sounds spanning from acid jazz, to hip-hop and electronica, perfectly encapsulating the eclectic tastes of both artists. ‘What Kinda Music’ doesn’t offer much in terms of world critique, Misch’s lyrics focus largely on love and nostalgia, but this combined with the variety of different soundscapes throughout the album, give us that perfect sense of escapism, one that is much-needed given the current state of the world.

This was one of those albums that nearly passed me by, and I’m so glad that I finally gave it a listen. If there was ever a time and space for a bit of emotional hardcore and emo, it is now. The album is full of dark, brooding songs that takes pain and twists it into a call-of-action, sometimes akin to Panic! At the Disco, on tracks like ‘BIG, WANNA BE’ and ‘Darkness Bleeds, FOTF’, and other times more viscerally, such as ‘Blow Me’, featuring Jason Aalon Butler of Fever 333 and letlive.. This contrast of styles runs throughout the album, soaring into radio-friendly territory before turning back the curtain into a violent outburst of emotion. We catch glimpses of hope, such as the monologue that opens title track ‘Heartwork’, and the following track ‘The Lighhouse’, that features Blink 182’s Mark Hoppus. We also see despair, like on ‘Bloody Nose’ and closing track ‘To Feel Something’. ‘Heartwork’ is the perfect soundtrack to a party that celebrates our emotions, the good, the bad and the ugly, becuase that is what makes us human afterall.

4 thoughts on “Album Reviews: My Top 5 Albums Released in April”