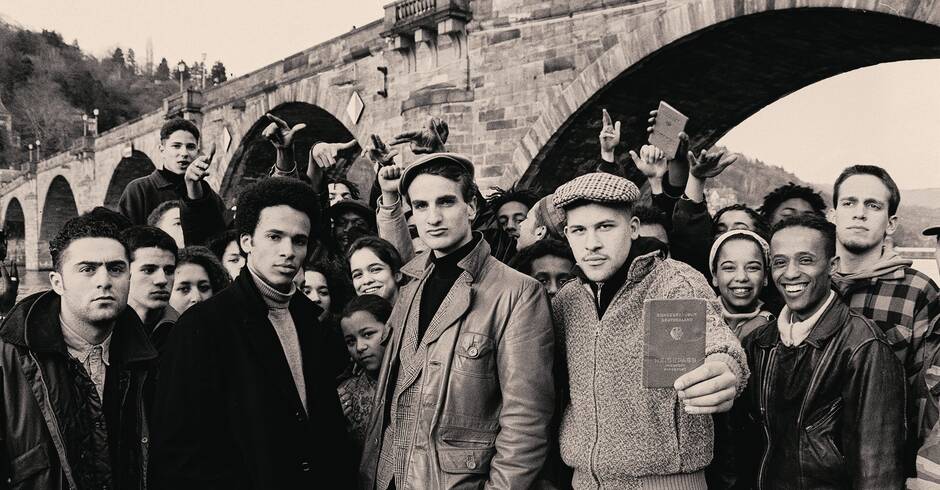 Next up in my series ‘Origins of European Hip-Hop’, I’ll take a look at a fragmented and divided hip-hop scene in Germany. Whilst in both France and Italy artists had ideological differences, and both scenes had significant political impacts, no scene in Europe had the kind of political backdrop and contrast of musicians than that in Germany. From Nationalist movements to Turkish rebellion, this post will piece together the development of hip-hop in a country still feeling the effects of the Second World War.

At the time of hip-hop entering into Germany in the mid 1980s’s the country was still split into two seperate states, the Federal Republic of Germany in the West, controlled by American, French and British forces, and the German Democratic Republic in the East, under the reign of the Soviet Union. Films such as Wild Style (1982) and Harry Belafonte’s Beat Street (1984) were early glimpses into the styles and charecteristics of hip-hop for the German population, with the large numbers of American soldiers stationed in West Germany having a big impact on how quickly this spread. From here novelty hits such as ‘Rappers Deutsch’ by the group G.L.S United, and attempts to rap from folk pop stars, celebrities and sports players began to emerge, but as Schacht (2015) states, it was “the epitome of awkwardness. It embodied the flatness of post-war German humour and everything that was uncool about fastidious German pop culture.” Thus, during the 1980s it was the visual elements of hip-hop, breakdancing and grafitti, that took afoot in the country, mostly in the West.

It wasn’t until the fall of the Berlin wall and the reunification of Germany that hip-hop really began to develop its own sound, growth and significance in the country. Whilst the fall of the Berlin wall was rightly celebrated, it not only represented a physical boundary between the country, but an ideological one too, and that still remained. Moving in a microcosm to that of the population as a whole, the hip-hop scene fragmented into different groups, each using the musical style to express their views on nationalism, immigration, society and politics.

One of the most notable releases at the time was the compilation album ‘Krauts with Attitude’ (1991), which derives from the controversial American rap group Niggaz With Attitude (N.W.A.). The album featured over 15 different acts from various parts of West Germany, some continuing to rap in English, and others in German. The use of the term Kraut was seen as a backlash towards the American and English attitude towards Germany, with the album supporting an underlying nationalism, in the linear notes it says, “now is the time to oppose somehow the self confidence of the English and the American.” The albums cover was designed in the colour of the national flag (black, red and gold), promoting a kind of national pride that had not been seen since the end of the Second World War.

Musically the album still relied heavily on the American styles and characteristics, and most of the songs didn’t even touch on the subject of National pride, but it was the way that the album was promoted by Bombastic Records that led itself to be taken on by Nationalist movements. Whether it was simply bravado or territorial competition, often seen in hip-hop (Bronx vs Queens, East Coast vs West Coast), the FNG vs USA stance ignited a feeling amongst many who wanted a return to German nationalism, and immigrants and the Americanisation of the West out.

In the following years xenophobia rose to concerning levels in Germany, and this led to a media and entertainment led campaign to use music to combat racism. This culminated in the compilation CD and LP ‘Rap gegen Rechts’ (rap against the right wing) released in 1993, and saw the rise in popularity of socially conscious hip-hop groups, such as Advanced Chemistry, and the more radio friendly Die Fantastischen Vier.

Despite this, there was still a large community of Turkish migrants who felt like their voice wasn’t being heard, and not included in the rise in popularity of hip-hop in Germany. In response, they rejected all African-American samples and the German language, in favour of samples drawn from Turkish arabesk and pop, and the language of their homeland. This emblematic blending of diasporic Black culture and diasporic Turkish culture completely represented an ongoing marginalisation of Turkish communities in the new unified Germany.

The most significant release out of this new scene was the album Cartel, in 1995. The album imposed a Turkish nationalism and pride that united the diasporic Turkish communities in Germany. It was seen as a direct response to the album Krauts with Attitude with its use of the colours of the Turkish flag on the album cover, with the ‘c’ in Cartel a manifestation of the crescent of Islam. Like Krauts with Attitude, it was a compilation album featuring various artists of Turkish decent. The compilation contained five tracks by Nuremberg artist Karakan, three songs from the Kiel group Da Crime Posse, three songs by Erci E from West Berlin, and a communal recording by all of the artists on the title track Cartel. The official press release makes the aims of the album clear: “the new identity: Like in France or England ethnic minorities cry against discrimination with their own music. Hip hop as a language is therefore a logic choice… Cartel want to offer their own identity, because only who makes clear, where he is standing, gets calculable and taken seriously. Cartel is the musical lobby for thousands of kids of the second generation, who expresses what they think and what they feel…”

Throughout the 1990’s the German hip-hop scene continued to emulate the wider social and political divide across the country, as Germany tentatively entered a new era of reunification and national identity. The music had developed into a scene with many ideological differences and styles, moving far away from American hip-hop into its own genre with critical discourses and arguments. German hip-hop artists had found their own voice within the genre, creating unique musical diasporas that would impact on society and popular music in Germany for many years to come.